@corsairs_legacy
Articles — Sea Dogs: To Each His Own
The Best Mobile Pirate Games of 2021 Volodymyr Bondarenko, head of the Ukrainian studio Mauris talks about the top 16 pirate mobile games in 2021.

Interesting pirate games are rarely released for PC and consoles, that’s why I decided to try all free-to-play pirate games that are currently available for phones and tablets and highlight the most worthwhile projects among them. The selection criterion for games was their presence in the search results in the store on the tablet using the word “pirates”. I decided that the presence of a tablet version is a sign of a well-developed product and it is simply more convenient to play on a tablet. In total, I found and installed 16 free-to-play games, the following search results were products from other topics.

During the preparation of materials for this video, I had looked enough at very unexpected game mechanics and active attempts to deceive players. The most popular pirate mobile game surprised me with its mechanics and trashy plot the most. But first things first. Sit back, we're starting.

I had to sort the games somehow and I did so according to the open data of the number of installations in the app store for December 2020.

I have sorted the games according to their popularity. The first block is formed of products with up to 5 thousand installations per month, but nevertheless hitting the search results. There were 5 of them: 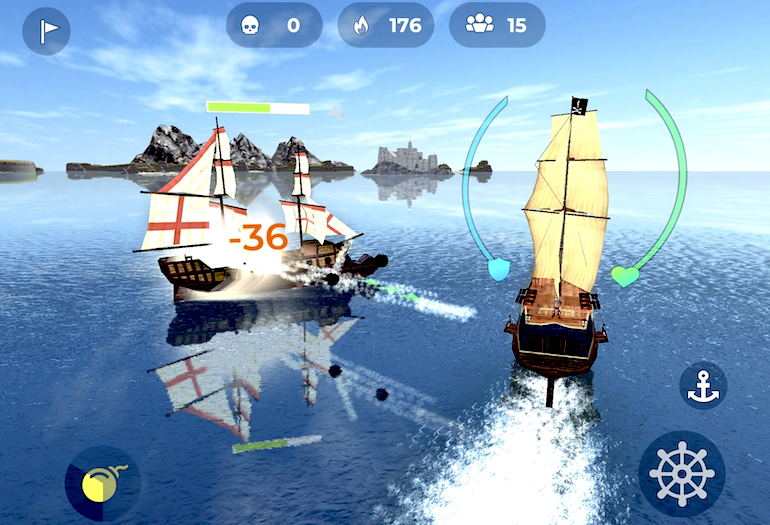 • And we are going to start with an absolutely dreadful piece that a game developer could create. I mean Pirate Ship Sim: Battle Cruise. The controls are not playable, the graphics are the weakest of all the games on the list, and every 10 seconds the developers try to sign the player for an expensive subscription, which will periodically withdraw money from the linked card. Dislike the game and let’s move on to the next one. 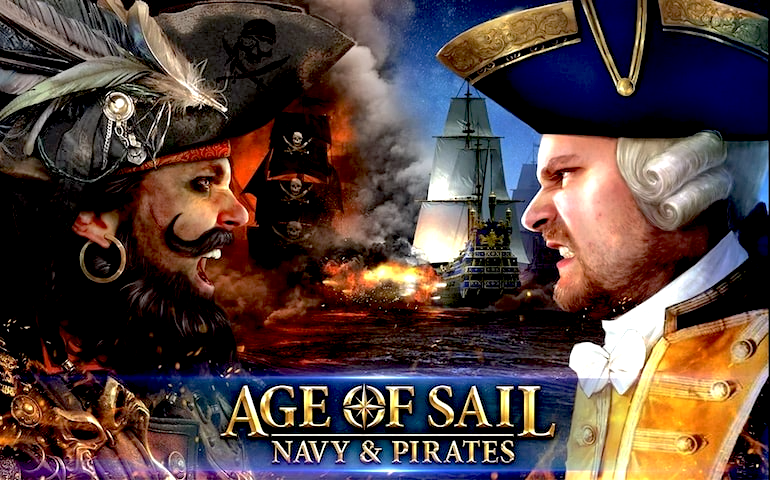 • Age of Sail: Navy & Pirates is a once very popular strategy game, similar to Mobile Strike and other games from the mobile strategy genre. The game has some veneer of the era of piracy, but in fact, it has nothing to do with the mechanics familiar to fans of pirate PC games. 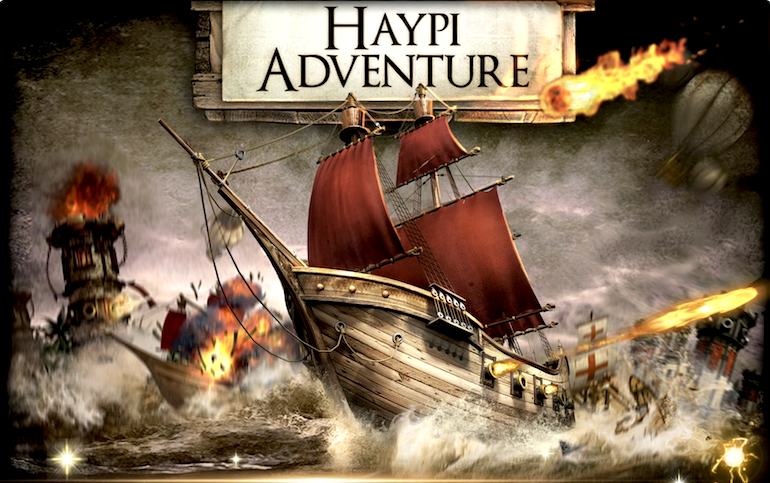 • Haypi Adventure – another strategy game similar in mechanics to Age of Sail, but made much simpler and with an old-fashioned appearance that was outdated at least 5 years ago. The game is not worthy of our further attention, let's move on. 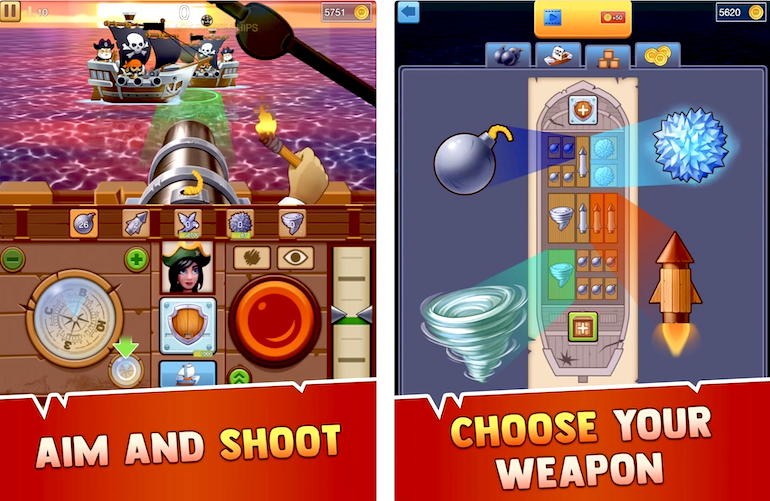 • Pirate Bay - Hero Adventure – the product is tailored for mobile phones and players who want to carry out the entire gameplay in 1 tap. The only action required is to shift the direction of the onboard gun and sink the ships. A one-evening game for those who are fond of the simplest mechanics. 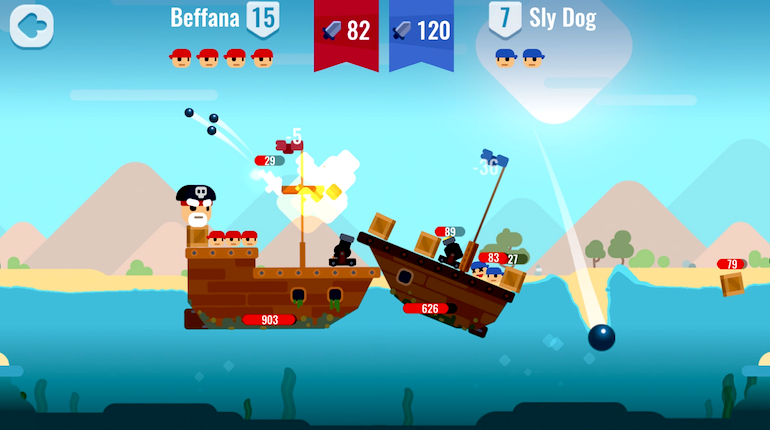 Then there are 3 games with 5-8 thousand installations: 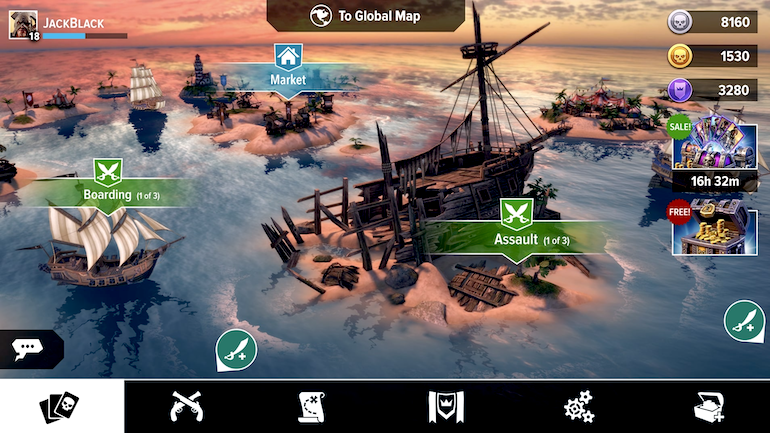 • Pirate Tales – game mechanics are very similar to Clash Royale. Two sides of 3 characters each take turns damaging each other. The player wins if his team of characters wins the bout. As a result, he gets XP, coins, and chests with cards of new characters and upgrades of the current ones. As for a game with so many buttons, it has nice graphics and a pretty intuitive interface. I recommend it to all lovers of turn-based battles. 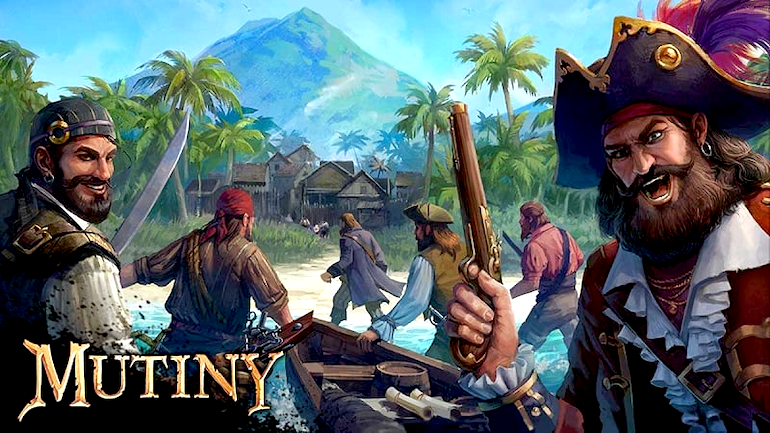 • Mutiny: Pirate Survival RPG – a third-person survival RPG, copy of Dawn of Zombies: The Survival. In the beginning, there is a naked character that the player has to upgrade. You can perceive some visual reference to the era of piracy but without deep immersion and mechanics typical for pirate games. 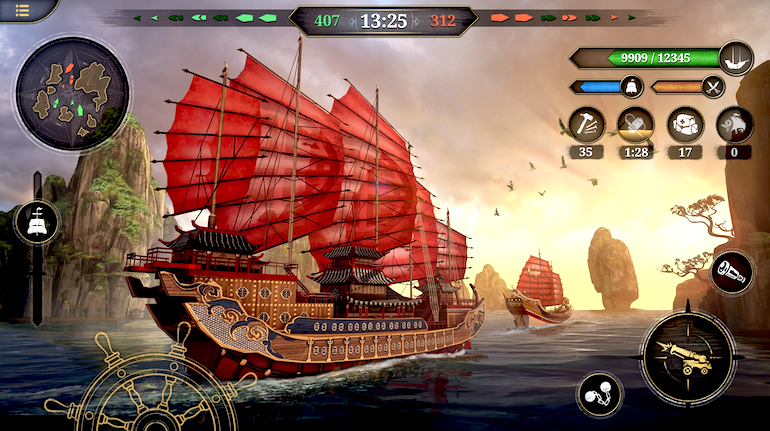 • King of Sails: Ship Battle – a sailing simulator with nice graphics and controls. The game turned out to be interesting and dynamic, I recommend it.

Then there are 4 games with 10 thousand installations each: 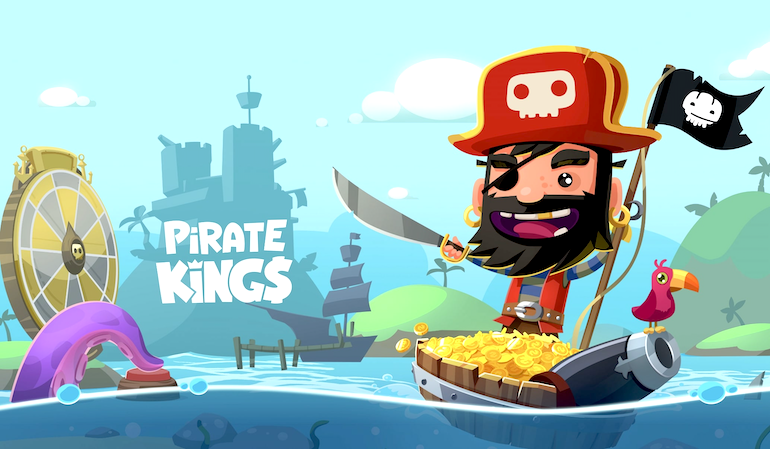 • Pirate Kings – a product for screen tapping. The maximum casualness of the gameplay looks very boring. The project is not about pirates, but about making money out of people who downloaded a new tapping game. 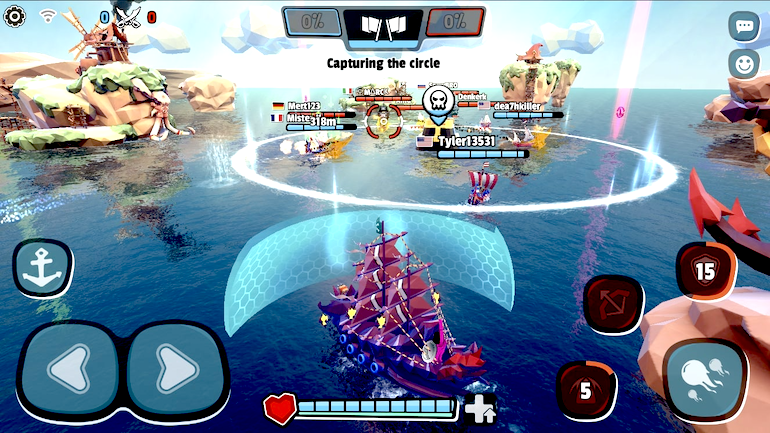 • Pirate Code – a cartoon sailboat simulator. We won’t go any further with this one as it lacks at least some reliability of details concerning the era of piracy. 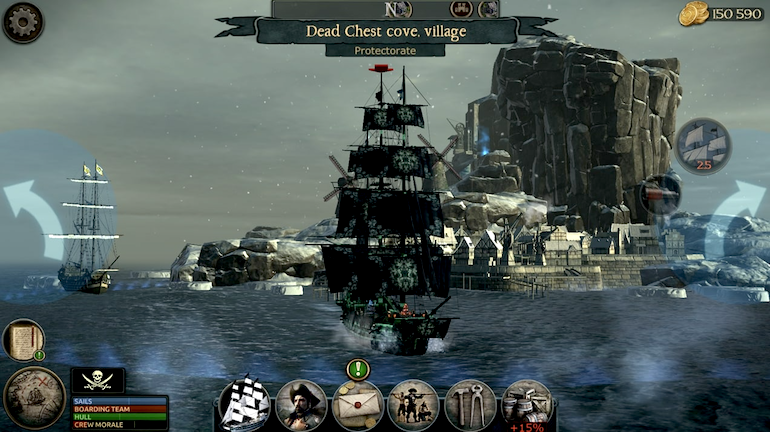 • Tempest - Pirate Action RPG – a sailboat simulator with third-person boarding. It looks good in the screenshots, but the game itself is very flawed. The physics of the ship in the corners are reminiscent of drifting in Need for Speed, and the gameplay, in general, is made quite boring and abstruse. 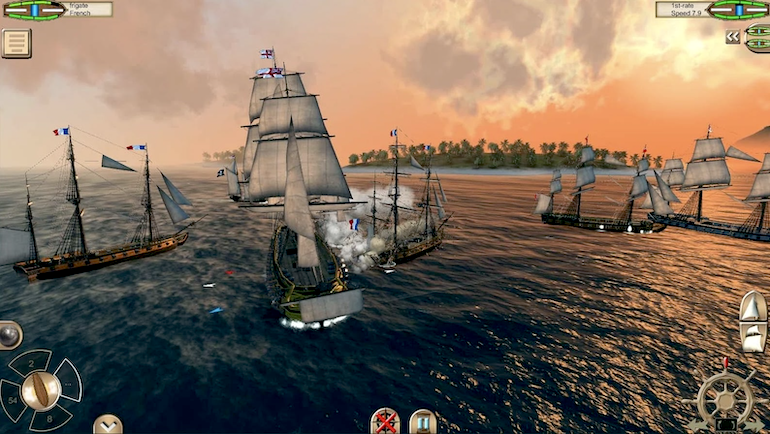 • The Pirate: Caribbean Hunt – a beautiful and well-executed sailboat simulator. It is perceived as an ideal simulator for mobile platforms, especially after Tempest, and Caribbean Hunt. The game is engaging and makes you want to play it. I recommend it. 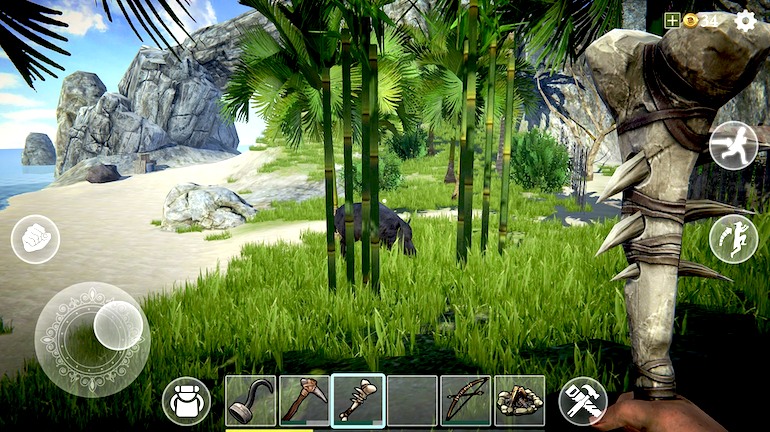 The captivating Last Pirate: Island Survival game has 30 thousand installations. This is a survival game, but with a first-person perspective that sets it apart from Mutiny: Pirate Survival RPG. The gameplay is engaging, the game mechanics are very simple, and the intro is made as intelligible as possible. The project arouses the desire to play it.

There are only 3 games left that have the biggest number of installs. 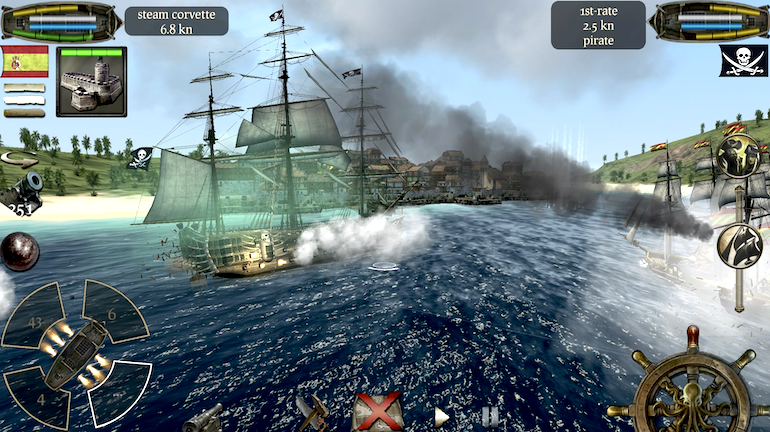 And the third place with 50 thousand installs goes to The Pirate: Plague of the Dead. This is a clone of The Pirate: Caribbean Hunt made by the same developers, but with a storyline. I highly recommend it to simulation game lovers. From my point of view, this is the best pirate-themed marine simulator for mobile platforms. 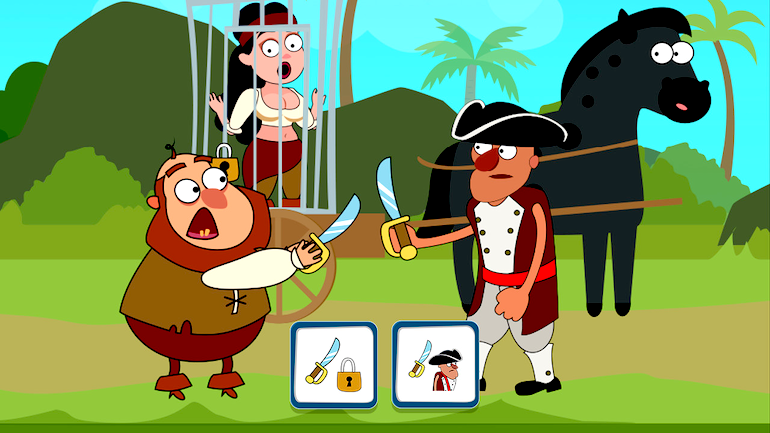 The second place goes to our Save the Pirate game, it got 60 thousand installs in one month. The plot tells us the story of a funny pirate, where in each situation the player has to make a decision between two options. The free mobile version of the game contains a lot of ads, which makes the full story walkthrough rather uncomfortable. The free enhanced PC version with no ads is available on Steam. 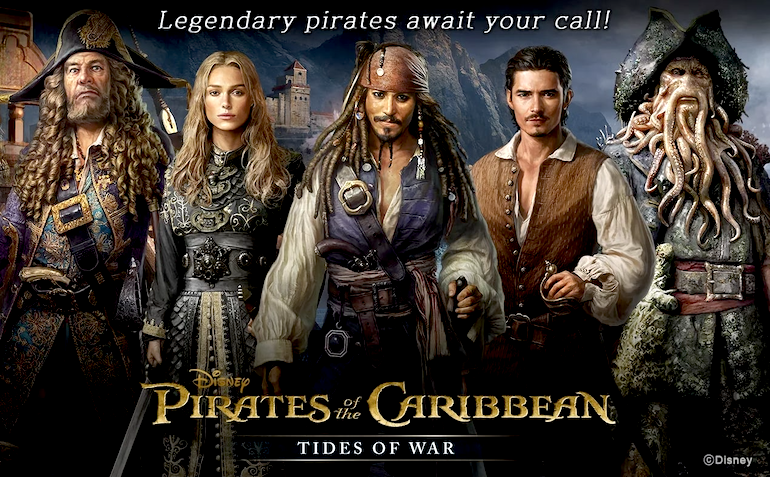 And the pressure is on! The most popular mobile pirate game is Pirates of the Caribbean based on the like-named movie with characters from the films.

But, alas, the game is implemented in the strategy genre and has nothing to do with Sea Dogs II: Pirates of the Caribbean. The player's goal is to build a city and take part in naval battles in the format of pressing 3 buttons, watching the animation, and getting the result. This does not allow you to enjoy the pirate romance of familiar PC game mechanics. There is neither overland movement nor a sailboat simulator.

From the very first minutes of the game, I’m absolutely appalled by the absurdity of the events shown on the screen. The player observes a series of not quite connected scenes with Jack Sparrow running around every 10 seconds.

I assume that the original version of the game had a logical and unhurried sequence of events, but during testing, the developers had to abandon the fluidity of the plot in favor of the action.

As an experienced mobile game developer, I can say that Android and iOS players are not so loyal to new downloaded games. Thus, they are often not ready to take a closer look, come to grips with a game, and especially read its content. That’s why I understand why the creators of the Pirates of the Caribbean were forced to make such a mix of bright pictures and animations at the expense of the narrative logic.

The main task of developers of free-to-play mobile games is to engage the maximum percentage of users in the first 5-10 minutes of the game so that they do not delete the game until the moment the game kindly offers them to buy something.

Over 200k people installed Pirates of the Caribbean in December.

The absolute dominance of the game on top of pirate-themed games testifies that the mobile gaming audience differs dramatically from the fans of PC and console pirate games.