@corsairs_legacy
Articles — Sea Dogs: To Each His Own
Sea Dogs on the GTA San Andreas engine Volodymyr Bondarenko, head of the Ukrainian studio Mauris talks about his experience with the GTA San Andreas mod with the textures of Sea Dogs: Caribbean Tales called GTA: Scarlet Sails. You can also watch this material on YouTube using the link provided.

In one of the communities devoted to Sea Dogs, on January 3rd there was an announcement of the GTA San Andreas mod with the textures of Sea Dogs: Caribbean Tales called GTA: Scarlet Sails. The developer announces 25 quests with full voice acting taking place on 5 islands and a secret mission where the player will have to play as a wild animal.

Having downloaded a 2GB file and simply unpacked it with an archiver, I faced the problem of choosing a screen resolution. The game does not support a 1920x1080 resolution. So, I manipulated the permissible resolution options and it took me 5 attempts to find a suitable option, where the distortion of the interface was minimal.

I hit a snag while minimizing and expanding the game – every second time the game stopped responding to mouse clicks and I needed to minimize and expand it again to be able to interact with the interface. Having settled this bug, I started playing.

From the very beginning, it becomes clear that all 32 announced voice actors are amateurs, as well as the scriptwriter.

That said, the gameplay itself leaves a pleasant impression. An interesting feeling arises from the control of a ship with the physics of a motor boat from GTA. 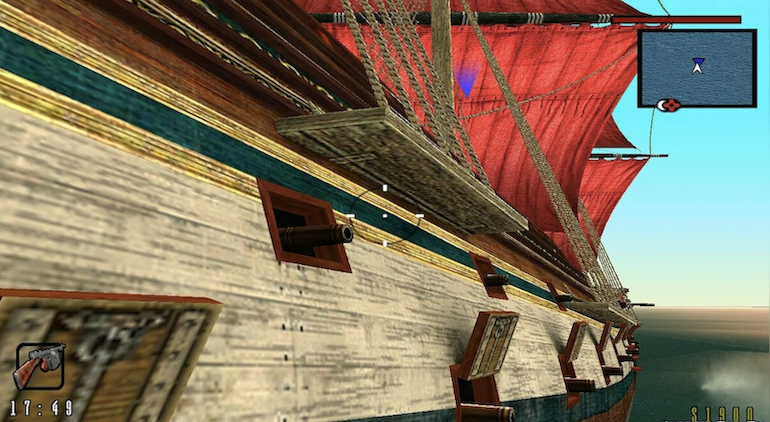 The game is not designed for deviations from the storyline, so when I left the ship near the pier, I could not get back on it nor go ashore. The character just started to swim under the textures of the city.

Having spent 10 minutes trying to get out of the situation, I restarted the game, and this time I made it exactly to the point marked on the map. When I got to the appropriate place, I saw the next cutscene and after it ended, the main character found himself on land and I did not have to try to leave the ship myself again.

Passing through the city, I came across a Spanish soldier, who looked inappropriate in the frame and the location itself barely resembled a Spanish settlement.

A distinguishing feature of the game is the ability to play for different characters, rewinding the tape. The more I played, the more I realized that the game was made with the textures of Sea Dogs, but without understanding the mechanics and logic of the pirate game. You see the same characters, and the same houses, but you realize that this is not Sea Dogs and the immersion level is close to 0 due to the lack of adaptation of everything around to the place and time of events. 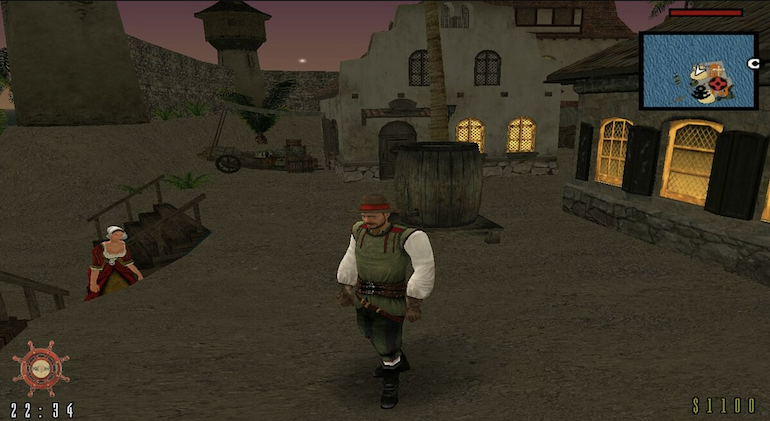 Passing the level, which is a flashback of the last day of the life of the main character's wife, who died a few days ago, I collected buckets and mops flying in the air, and when I tried to walk up to a cow on the “water the flowers” task the game simply crashed. There are no autosaves in the game and I did not make any saves either. I was not ready to start the game for the third time, so I just decided to bring it to a close and deleted the game.

I assume that the developers will fix all fatal bugs and the game will be more stable in the coming months. But if you are a true lover of pirate games, I don’t recommend you play it.

As a fan of Sea Dogs, I felt emptiness and frustration while closing the Scarlet Sails game. The eyes see familiar textures, but the carelessness with which they are misused leaves a bad aftertaste.

I’m not a fan of the Grand Theft Auto series of games, so I only rate it as a pirate game lover.