Hello everyone. The result of a poll about the run animation proves that most of the audience liked the final animation and that makes us happy. We solved a problem with the character’s sliding. Here you can see a fixed version. We plan to keep improving it, but it’s time to move on. Since many people from the audience agreed on the result, we’re leaving the run animation as it is now and we’ll continue working on it when polishing all animations in the future.

We were happy to see positive comments about combat animations. In one of the next videos, we’ll talk about combat in detail and share our plans for improving it. In addition, we realized that the audience would be interested in a devlog with Q&A. In it, we’ll be able to tell you more about the development team, whether the game will have animals, whether there will be a mystery, provide information about the release, and a lot more. We’ll make a separate video where we will answer all the questions under the previous video. You can also write additional questions under the new development video.

We’ve seen a few comments about flickering shadows and people asked how much are we planning to show the same part of the jungle? Today we’ll share our plans, show you the current result of working on locations, and let you know when you’ll see new locations. 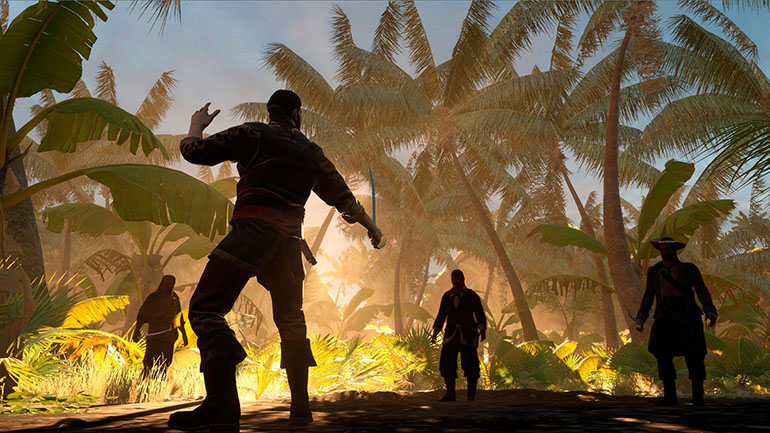 In the game’s announcement, we told you that we’ll try to make the most of the purchased textures to speed up the development process and spend less money. However, with the growth of our team and level of expertise, we came to understand that hand-made buildings look more interesting and of better quality than off-the-shelf solutions. Currently, our team is in the process of creating unique buildings and locations that will be in the first game.

A few months ago, there was a video on the official Russian-language channel Save the Pirate where a historian analyzed 22 forts from Sea Dogs. He explained their strengths and weaknesses from a tactical point of view and how historically accurate they are. Based on this analysis we designed our first fort in Corsairs Legacy that we’ll show in a separate video. We try to apply a similar approach to every structure that we design.

We’re not showing the main game locations until they’re fully ready. Now it’s time to explain the strategy pursued by our team in the process of developing locations.

In Sea Dogs, the land gameplay consisted of space-limited locations with loading screens each 10-20 seconds while the character moves from point A to point B. If the character was outside the city, the player had no understanding of the island’s layout and they had to go on forums and search for maps of paths that look all the same. In fact, the island is a set of rooms that have no geographical relation to each other, and after the point of transition between locations is reached, the game teleports the character to another room with decorations that give the impression of a continuous path.

The solution chosen by developers at that moment was forward-looking, it allowed minimizing technical requirements of the game and reusing the same locations in multiple places.

The sun always stays in one place, so a day-night cycle is changing when going between locations, and at the time players were fine with that.

In 2021, such an approach is obsolete and very undesirable. Due to this, we abandoned the concept of a set of locations and decided to design the island as a whole, making one location with a minimal number of loading screens. The task of creating a full-fledged open world has many complications, one of which is to ensure stable FPS and minimize the requirements necessary for the game to work. Shadow flickering seen in the game footage is due to the need for increasing shadow render distance, which leads to a high GPU load.

Currently, we’re concentrating on creating a single technologically efficient approach to making whole islands that would show good results for graphics and optimal use of PC resources. In the first game, Barbados will become our reference model. After the release of the game, we will collect player feedback, make additional changes to graphics optimization and after that, we’ll be able to use ready-made and well-proven technology to create new islands. 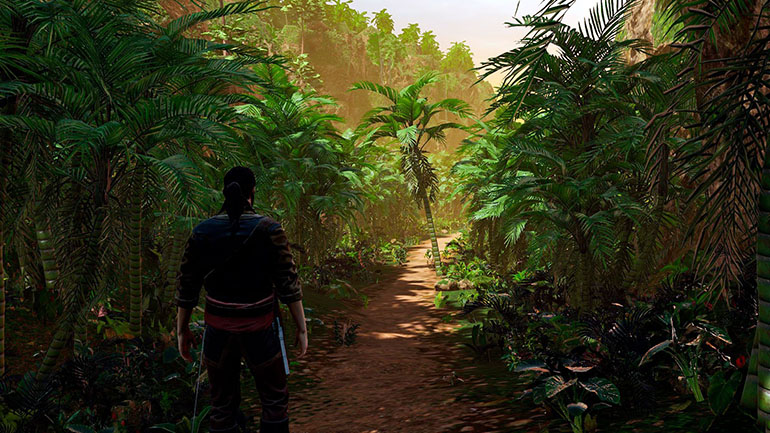 Here is an example: we don’t place each palm or bush separately. We define zones that should be filled with plants, set parameters of distribution and quality of textures, and the game engine does the rest.

Nevertheless, we spent a couple of months carefully making a level design for locations, creating interesting landscapes, beautiful scenery, and a comfortable view from different points of the map that will give the player the ability to see key landmarks and navigate. We want to bring the player's perception of games about pirates to the next level.

We use a dynamic sun that changes its location based on time of day and creates unique lighting. We also implemented dynamic weather that adds nice visual and sound effects to the gameplay. These features don’t allow to programmatically calculate the location and appearance of each object’s shadow on a map once, which leads to high GPU load. However, we think that those seemingly little things create an atmosphere for the player and increase engagement in the gameplay.

Currently, we’re at the stage of finalizing an appearance of the game’s main locations and their optimization. The next step will be to work on increasing the graphics quality and vibrancy of the game world. Right now, you can see how the game looks in the current state of development, it doesn’t have graphical post-processing. Our strategy is to be fully open and honest with players. That’s why we made a strategic decision to not make a pretty promo video before the release. Instead, we’ll make a gameplay video and spend all our efforts on ensuring that the visuals players will see in the video and the game itself look the best.