The last devlog sparked many discussions about the current implementation of the battle system in Corsairs Legacy. We realized that the audience wanted to see a more modern battle system.

Thank you for your comments. After getting feedback, we started implementing alternative variants of the new battle system. It will get better!

Currently, we are focusing on polishing other aspects of the game and preparing the demo, but we’ll get back to the battle system in the near future. For now, we can’t guarantee the first release will include the heavily changed battle system, but we’ll try our best to finish it in time.

We’d also like to mention sounds – all sounds that currently exist in test versions of the game are collected for testing. We started to implement the full sound design, but for now, we have the final audio for the mini-game.

In the last weeks, we made a lot of important updates, and in the next few videos, you’ll see a complete mini-game Perudo, a finished tavern location, a global update of the graphics, and much more. Each next episode we’ll be showing a new portion of graphics content.

Today we’ll show a model of the main hero, Jack Rackham, and the results that we achieved while developing characters over the last month, from the moment of presenting models of British soldiers in the eleventh devlog.

It should be reminded that currently in all videos we use a model from a purchased set of characters for the main character. We think that the model was perfect for the main hero, but it was only used as a placeholder until we made our unique model of Jack Rackham. We got a few emails from our viewers with questions stating that they saw the exact same main character in the mobile game Evony. It’s simple – they also bought this character, used it in their icon, and actively used it in advertisements which you can see on social media or in other apps.

When designing the main hero, we wanted to not just make a unique character model but to make a technology that will allow character customization. Our 3D character artist used an image of a corsair as a basis, the same image our illustrator drew for a game poster that you see at the end of each video and on the game’s page on Steam.

So, drumroll, we are glad to present you Jack Rackham, the main hero of Corsairs Legacy. We tried our best to make the model look good to make a player feel comfortable while playing the game. 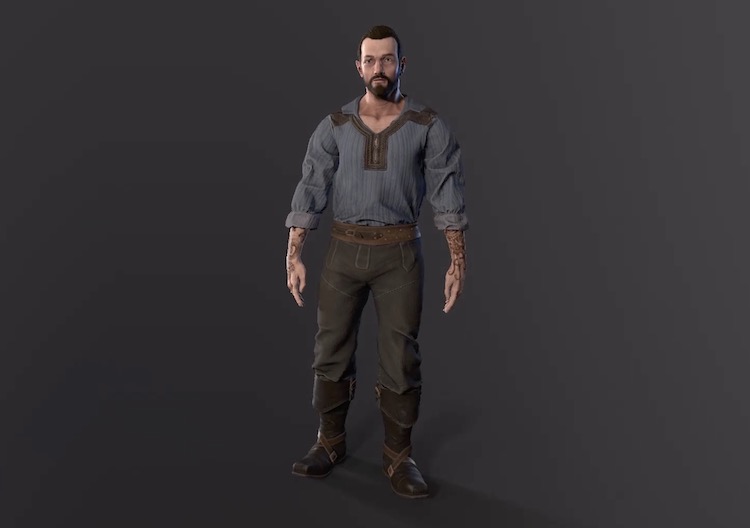 Currently, we’re working on additional elements of customization that will be included in the project’s architecture, but, most likely, they won’t make it to the first game. Later in Corsairs Legacy, we plan to expand the features of the main hero’s customization.

In the second part of Corsairs Legacy, we’ll add an eyepatch. We also made the first hat that you could use for the main hero.

We already designed a second set of clothes with the ability to combine a top and bottom half and change their color. You can see all the changes of the main character in the new development diary video:

Do you like that result? We’ll wait for your thoughts about the customization in the comments to the new devlog.