Today we will be talking about the roleplaying system in the game. But, before we begin, we’d like to share some exciting news. The First 3 game soundtracks are now available on YouTube Music, Apple Music, SoundCloud, and Spotify. Now Shazam algorithms can easily recognize our tracks. In addition, Corsairs Legacy soundtracks are published on our YouTube channel.

In the comments on previous videos, there were a fair number of suggestions to change the character’s run animation. We’re already working on it, and in the next video, you’ll see what we come up with, as well as a poll for you to choose the best-run animation.

And now, to the topic of this video. While making the game’s roleplaying system, we tried to take into account the advantages of known skill systems from Sea Dogs and Fallout, such as PIRATES and SPECIAL, as well as different approaches to implement a roleplaying system similar to other relevant games.

We found out that in Sea Dogs the total damage is affected by the weight of a blade, weapon damage value (correlated with the weight), and corresponding skill level. Basically, the heaviest blade will always yield maximal damage.

In our view, it’s important to give the player several strategies of skill development, each with its own advantages and disadvantages. In Corsairs Legacy, blades will have three weight classes:

Medium class blades will have higher base damage than light class blades, but not in all cases. The heavier the weapon, the harder it gets to use it effectively in combat, especially if a character hasn’t developed a physique. A heavy blade in the hands of a warrior with low strength will be less useful than a light rapier, more suitable for the character’s physique.

Due to this, in order to get the most out of heavy weapons, you’ll have to develop a character’s strength. All blades have base damage, but total damage depends on the character’s characteristics. It can be much lower than the base weapon damage if characteristic requirements aren’t met.

Combat skills will need to be developed for each weapon class separately. The more you use a weapon of a certain class, the higher the skill level and the total damage that you deal using any blade of the same class.

Let’s move on to the game interface and discuss the player tab in detail. 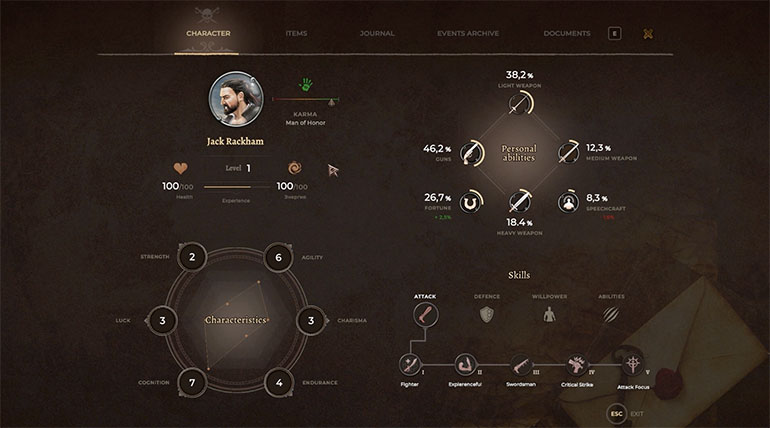 The game has 6 main characteristics:

We’ve made every effort to balance the characteristics so that the player could try different strategies of character development.

The character has personal skills that will be growing throughout the game when gaining experience and developing characteristics.

For each defeated enemy, using a certain class of weapon, the character will get the corresponding skill increased. Skills also increase when developing agility.

Luck and charisma are based on the hero’s characteristics, but they can also change depending on some other parameters.

Furthermore, a bonus to personal skills can be gained by various charms that you can carry, but it’s most important to choose what to put in the backpack, because charms may do more harm than good.

Let’s discuss abilities. There Are 20 of them and when you get to the next level, you get to develop one of the abilities from the following categories:

We won’t be reviewing each one right now. They all give specific bonuses to the character. We added a description for when you hover an icon, that way the player can read all the above-mentioned information in the game interface, without the need to study the whole roleplaying system in depth.

We’ll appreciate your feedback in the comments to the new video on our YouTube channel. Also, we’d like to remind you that Corsairs Legacy has an official Telegram channel, where you can get notifications about new videos on the game.