The spirit of freedom, cheap rum, and fascinating adventures, promising untold riches. These are the things that inspire all kinds of adventurers to face their destiny in the Caribbean.

That’s why we love games about pirates. The Caribbean is the place where danger awaits the hero at every turn, however, experienced adventurers, who gathered a loyal crew, see colossal opportunities ahead that may outweigh any related risk.

The town tavern. A place where paths of all adventurers meet. A place where promising meetings happen, deals are made and new alliances are formed. Today’s devlog is dedicated to the first tavern in Corsairs Legacy, which soon each fan of pirate adventures will be able to visit.

Matthew Cline, the owner of the tavern “Silver fin”. For over 18 years, he’s been running the only proper place to stay overnight in Bridgetown with good booze and decent chowder. Due to not very presentable look, this man makes the first impression of a drunk who pours himself a drink first and only then serves his clients. But everyone who had business with Cline knows that the appearance is often deceiving. 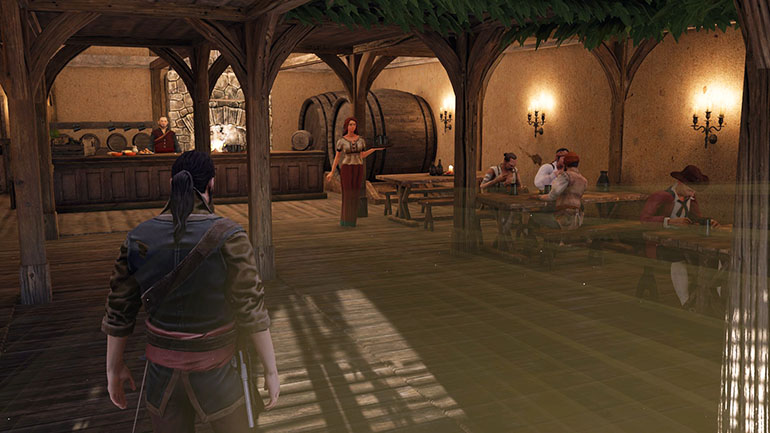 18 years of managing a profitable business, where all employees are well-schooled and disciplined, is really rare for the Caribbean. Cline loves to count money, but an enterprising mind knows a fine line between thrifty conduct of business and cheapness that creates more problems.

Rich guests from the Old World tried to kick “Silver fin” out of the business on several occasions, opening other taverns in Bridgetown and using all possible methods of influence, paying out of their pocket. Unfortunately for them, old fellow Cline knows how to take a punch. There were three attempts to get him out of the business but to no avail. Sooner or later, visitors run out of money and for some reason, new taverns only bring losses. Disappointed entrepreneurs had to sell the property for nothing and quickly return to the Old World. After all, they just come and go, while Matthew Cline is running the tavern, gathering some of the most influential people in the town under his roof. He knows almost everything that happens in the colony.

The last failed entrepreneur sold his newly built tavern for peanuts to the owner of a local brothel, Nicholas Briggs. It’s not hard to guess how soon the newly acquired building turned into the abode of lust and debauchery. Although, it’s a story for another time. Getting back to “Silver fin”…

There is a lot of space on the first floor for those who want to eat well, drink some booze or hold a business meeting. There are a lot of locals here at all times.

Calm Nick watches the basement door, letting through only those who were accepted by Matthew Cline himself. Yeah, the mysterious basement is one of the people’s favorite topics for rumors. In any case, despite all the tall tales around the private club, everyone who has access to it doesn’t answer any questions.

Calm Nick got his nickname for his calmness with which he breaks the arms of anyone who wants to brawl and damage the property of “Silver fin”. Nick is a former soldier of the English Crown who was demoted from the garrison for his excessive brutality on duty. He found his calling in “Silver fin”. Let’s not even talk about the ability to freely show his harsh temper and receive a decent salary for it, even for Bridgetown.

Let’s move on to the second floor. The most common people here are sailors who have chosen to try their luck playing dice. In “Silver fin”, in a cozy and uncrowded atmosphere, anyone may put their month’s pay on the line and try to double it, while playing the popular Caribbean game Perudo. 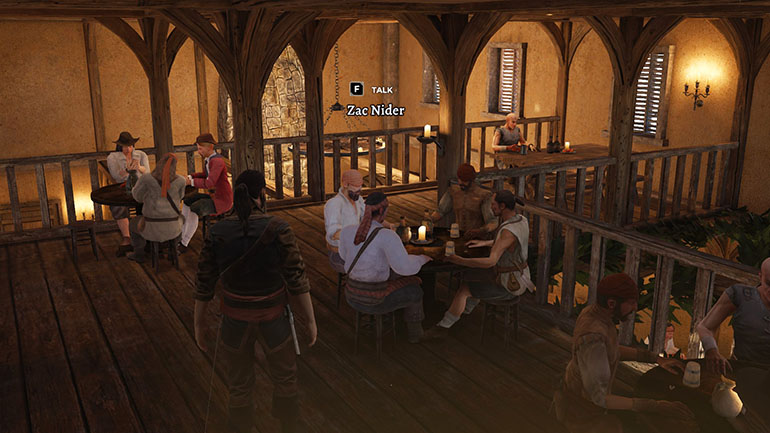 All gambling tables are divided by the skills of players. Depending on their reputation, each player goes to the table where other players with the same skills are. Beginners play for pennies, but it’s possible to make, or lose, large amounts of money at the professionals’ table.

For visitors, there are guest rooms on the third floor of “Silver fin”. Cline really jacks up the prices, so the locals can’t afford to rent these rooms. On the other hand, for visitors who are willing to pay more due to the lack of alternatives, there are always plenty of free rooms.

Well, that will be it for Bridgetown’s tavern review. I’m very interested in what you have to say about this style of narration, dear viewer. Did you like it?