Today we'll tell you more about the sailing mode, the future demo, show you the new ship, reveal some of our plans, and tell you about the content format and the schedule for the next devlogs.

We published a teaser for the demo, where we showed the sailing mode of Corsairs Legacy and announced that the demo will be available to anyone and you can subscribe to it on a separate Steam page.

We’re glad that the audience welcomed the water transparency and underwater world near the island coasts. We think it goes well with the game’s visuals and overall atmosphere. In the future, we plan to add third-person underwater gameplay. You noticed that there are no splashes near the ship. We already implemented the water extrusion and foam and now it looks more realistic. In the next stages of the development, we also plan to add splashes.

You are now seeing the new ship – the snow. You can see the foam around it. The ship is finished and imported to the game. As additional customization, we’re considering adding guns on a sliding carriage of a smaller size in round ports. Also, there are currently 2 other ships in the final stage of development which will be added to the game in the near future. We encountered an interesting problem – most of the popular ships are from the early 18th century and we would probably have to start adding those ships in the near future. For now, we have a few more blueprints from the 17th century in store. 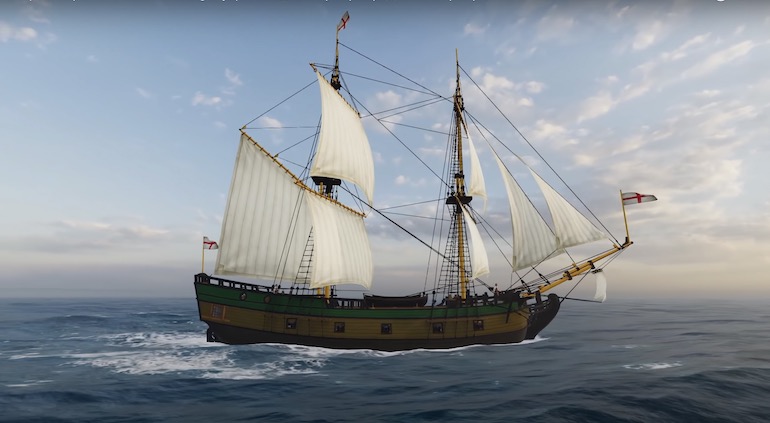 Many viewers were concerned that the ship’s speed will be too high. Currently, the ship’s downwind speed is up to 13 knots, and upwind speed can go down to 0,2 knots. These numbers correspond to the real ship speeds of that time.

We’re considering giving the player the ability to choose between a realistic sailing simulator and an accelerated one, where the speed of all ships will be doubled. Double-time acceleration will be available in both cases. This way, both people who want realism, and those who like fast sea battles will be happy.

In the sea teaser, we noticed that YouTube makes the uploaded video look worse than the original. We started to study this issue and found out that we need to increase the quality of the source video so that the final video compressed by YouTube would look better. Now you can watch the current devlog in Ultra HD quality with 60 FPS. From now on, we’ll try to make all Corsairs Legacy content in this quality, so that the final image would stay clear.

We made a poll on our Russian-language Save the Pirate YouTube channel where the audience could suggest how often we should release new devlogs in 2022: once every 2 weeks, like in 2021, or once a month, but the video is longer and more informative. The audience’s opinion was divided and supported both options. Most of the comments we received suggest that it would be better if videos wouldn’t affect the game’s development and would be as informative as possible.

There were multiple reasons for the poll:

In the end, to accommodate the wishes of the audience, we decided that main devlogs will be posted once every 4 weeks, and in each next video, we’ll try to provide full information and share new screenshots from the game. Also, we plan to make themed devlogs that we will be posting when they’re ready. Therefore, there will be 1 devlog in three weeks on average, which will allow us to find a compromise between those who want videos every 2 weeks, and once a month.